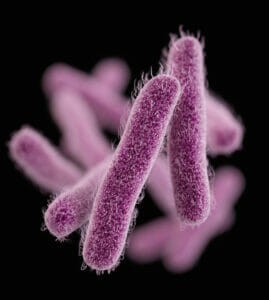 Shigellosis is an infectious disease caused by a group of bacteria called Shigella. Most Shigella infections are the result of the bacterium passing from one person to another. The spread of Shigella from an infected person to others can be stopped by frequent hand washing with soap.

Most people infected with Shigella develop diarrhea, fever, and stomach cramps starting a day or two after they are exposed to the bacteria. The diarrhea is often bloody. Shigellosis usually resolves in 5 to 7 days. Persons with shigellosis in the United States rarely require hospitalization. A severe infection with high fever may be associated with seizures in children less than 2 years old. Some persons who are infected may have no symptoms at all, but may still pass the Shigella bacteria to others.

Preventing the spread of shigellosis:

Diagnosing Shigella infections
Many different kinds of germs can cause diarrhea, so establishing the cause will help guide treatment. Determining that Shigella is the cause of the illness depends on laboratory tests that identify Shigella in the stools of an infected person. The laboratory can also do special tests to determine which antibiotics, if any, would be best to treat the infection.

Treating Shigella infections
Persons with mild infections usually recover quickly without antibiotic treatment. However, appropriate antibiotic treatment kills Shigella bacteria, and may shorten the illness by a few days. Some Shigella bacteria have become resistant to antibiotics. This means some antibiotics might not be effective for treatment. Using antibiotics to treat shigellosis can sometimes make the germs more resistant. Therefore, when many persons in a community are affected by shigellosis, antibiotics are sometimes used to treat only the most severe cases. Antidiarrheal agents such as loperamide (Imodium*) or diphenoxylate with atropine (Lomotil*) can make the illness worse and should be avoided.

About Shigella
Shigella is microscopic living creatures that pass from person to person. Shigella was discovered over 100 years ago by a Japanese scientist named Shiga, for whom they are named. There are several different kinds of Shigella bacteria: Shigella sonnei, also known as “Group D” Shigella, accounts for over two-thirds of shigellosis in the United States. Shigella flexneri, or “Group B” Shigella, accounts for almost all the rest. Other types of Shigella are rare in this country, though they continue to be important causes of disease in the developing world. One type found in the developing world, Shigella dysenteriae type 1, can cause deadly epidemics.

How common is shigellosis?
Every year, about 14,000 cases of shigellosis are reported in the United States. Because many milder cases are not diagnosed or reported, the actual number of infections may be twenty times greater. Shigellosis is particularly common and causes recurrent problems in settings where hygiene is poor and can sometimes sweep through entire communities. It is more common in summer than winter. Children, especially toddlers aged 2 to 4, are the most likely to get shigellosis. Many cases are related to the spread of illness in child-care settings, and many are the result of the spread of the illness in families with small children.

Long term consequences of shigellosis
Persons with diarrhea usually recover completely, although it may be several months before their bowel habits are entirely normal. About 2% of persons who are infected with one type of Shigella, Shigella flexneri, later develop pains in their joints, irritation of the eyes, and painful urination. This is called post-infectious arthritis. It can last for months or years, and can lead to chronic arthritis. Post-infectious arthritis is caused by a reaction to Shigella infection that happens only in people who are genetically predisposed to it.
Once someone has had shigellosis, they are not likely to get infected with that specific type again for at least several years. However, they can still get infected with other types of Shigella.

Basic food safety precautions and disinfection of drinking water prevents shigellosis from food and water. However, people with shigellosis should not prepare food or drinks for others until they have been shown to no longer be carrying the Shigella bacterium, or if they have had no diarrhea for at least 2 days. At swimming beaches, having enough bathrooms and handwashing stations with soap near the swimming area helps keep the water from becoming contaminated.

When a community-wide outbreak occurs, a community-wide approach to promote handwashing and basic hygiene among children can stop the outbreak. Improvements in worker hygiene during vegetable and fruit picking and packing may prevent shigellosis caused by contaminated produce.