Our life was so full of joy until everything came to a screeching halt one day in 2013. 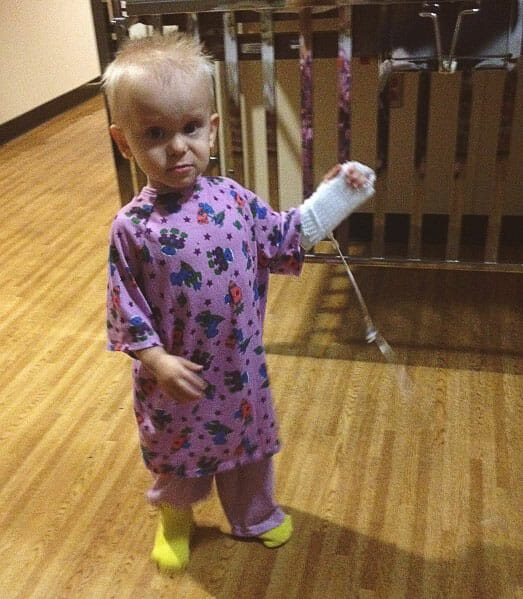 I write today as both a mother, and an advocate. Sharing my story with you in order to shed light on an industry where stories like mine are quickly forgotten. I bring this to you today, although it is not entirely my story to tell. In 2013, our son Noah (18 months old), was a victim of severe food poisoning. Our family, like many others, was devastated by the lack of legislative authority to protect its people from a deadly threat plaguing our meat industry and the American people. A plague that in writing this, I hope to diminish.

Our son Noah was a beautiful 18 month old boy. Unlike his siblings (Adam 6 and Anna 5 at the time) he was our social butterfly. Noah loved to give love to anyone that would have it. Most of all he loved music. Even as an infant, when mommy was silent, he would hum himself to sleep as we rocked in the chair each night. He loved to “fix” things with his daddy James and he was growing into a beautiful little man. Our life was so full of joy until everything came to a screeching halt one day in 2013.

My son’s story began in September when he was suddenly stricken with a fever. Like any parent would do, we brought him to the pediatrician in hopes of finding a remedy. We figured he caught a little bug and it would pass soon. But it wasn’t passing, in fact it only became worse. However, with no other symptoms, all we could do was wait. The doctors ran a battery of tests at my son over the course of a month, but they were unable to determine the source of his mysterious fever. My baby was under attack and not knowing what caused it was maddening. At that point, I asked his pediatrician if admission to the hospital would streamline testing. Reluctantly, the pediatrician agreed and we were at a local hospital later that night.

After days of grueling tests and scores of different doctors, they finally discovered that our little Noah had a large abscess in his brain. Still, no one knew why this was happening to our baby but they could see that he was in extreme pain. This is when the brain surgery took place. When you see medical dramas on television, you have this idea in your head about informed decisions and doctors weighing options, but the reality of it is nothing like that. Noah needed surgery fast to relieve the pressure in his head or he was going to die. We signed a paper and left the talking for later.

Slicing open his little scalp, doctors immediately went in, cut open a piece of his skull and removed the abscess. After three hours of pacing and heart-racing panic my little boy was out of surgery. The doctor came in before our son, explained what was done, and gave us a glimpse of the long road ahead. He explained that the abscess in the front was drained, but an additional abscess was found in the back and was too difficult to operate on. At this point, our surgeon was sure that Noah had some infectious bacteria. We would not know what type until two days later when pathology could determine what was killing him. We were told he would probably need IV antibiotics for six weeks to get rid of the remaining abscess but none of the doctors were sure. Noah would have to be monitored with frequent MRI’s to check the progression of the antibiotics.

Finally after what seemed like a lifetime they wheeled Noah back up to our room. When I finally saw him, every word on my lips and thought in my head was fixated on my tremendous love for him and the fact that he was okay. He was placed on a ventilator so the doctors could keep him in a medically-induced coma. His little brain needed time to heal before he would be allowed to move around. Suddenly, every moment, past and present, I had with my baby was so precious. All I could think about was his sweet smile, his unique names for things like his Mina (blanket), and how much I wanted to hold him. There was no time to think about the future while standing at his bedside. I needed to live in that moment, because for those moments my son was still with me, still alive.

Throughout the following weeks, James and I took turns staying by Noah’s bedside or being home with Adam and Anna. The first time I saw my other children was a week and a half after Noah’s hospital journey started. None of my kids had ever spent a night without Mommy, so I will never forget how special our reunion was. We sat in front of a movie and ate pizza on the couch while we snuggled. They hadn’t ever had food in the living room before, so to them, this was a huge deal! Nothing was normal for those following weeks. Watching a baby boy suffer in a hospital is not normal. Whiling away the hours waiting for answers is not normal. Sleeping on a hospital chair away from home and loved ones is certainly not normal.

Pathology finally discovered that Noah had a severe infection in his bloodstream, which led to the abscesses. He had somehow contracted an antibiotic-resistant strain of Salmonella Heidelberg. This knowledge helped the doctors formulate a treatment plan, but it only left us with more questions. Watching my boy lay in a hospital bed, with stitches on his head from the surgery, all sorts of IVs and liquids being pumped through him; I never thought I’d be in this situation. I knew it was all there to help him, but it was hard to trust the doctors. Not knowing exactly how it came to be, or how it invaded his little body, made it hard to trust anyone and anything. It was all a big mysterious question mark constantly plaguing my thoughts and invading my heart. Yet, I had no choice but to trust that the doctors knew what they were doing and would take care of my precious baby. And finally, after three weeks of being in an isolated hospital room, Noah was able to come home in early November. 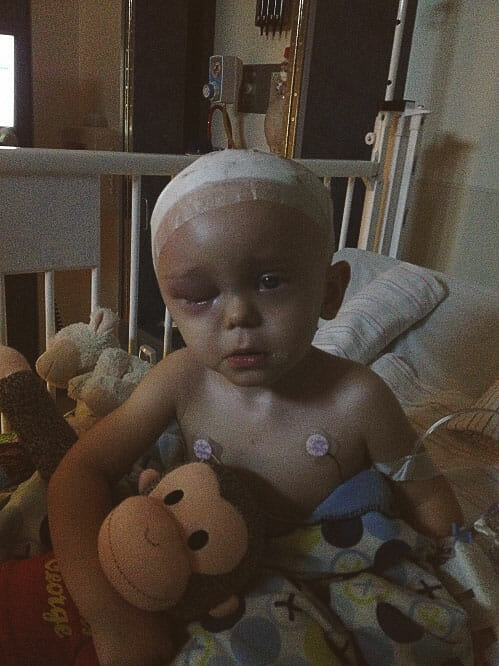 We spent weeks doing IV treatments at home with help and training from a special nurse. After a while Noah was finally able to stop the IVs and get some normalcy back. We just celebrated Noah’s second birthday and we have been keeping a very close eye on his development. We have to be vigilant to potential seizures and he has to have an MRI every few months. The MRIs are hard on all of us. A two-year-old does not understand why he must be back in the hospital. He is so strong, but the visits are often accompanied with tears. For me, it is a reminder of those three heart wrenching weeks, holding my breath to hear if the doctors found anything else.

Because of Noah’s age, it is hard to tell exactly what the long-term consequences could be. Infections of this type can cause learning delays, lifetime seizures, and other disabilities. Though it is futile to try to predict the future for anyone, after going through this I cannot help but wonder what life will be like for my son. Will he go to college? Have the excitement of getting his license at 16? Be able to play sports or be in the band? For now it is a waiting game. Noah’s courage and strength seem to be all that keeps me going at times. He is a brave, amazing, young man and we cherish every moment we have. Like anyone, Noah deserves all of the best in life. He will always know that he is loved because whatever comes, we’ll tackle it as a team and be grateful that we are together as a family. 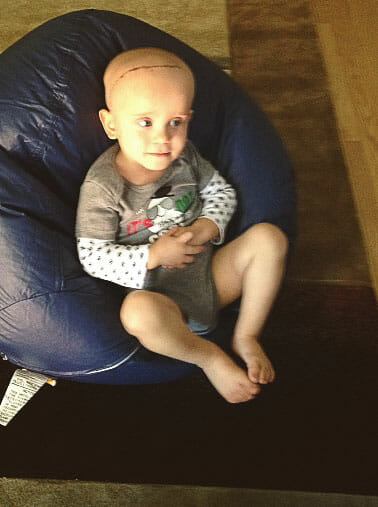 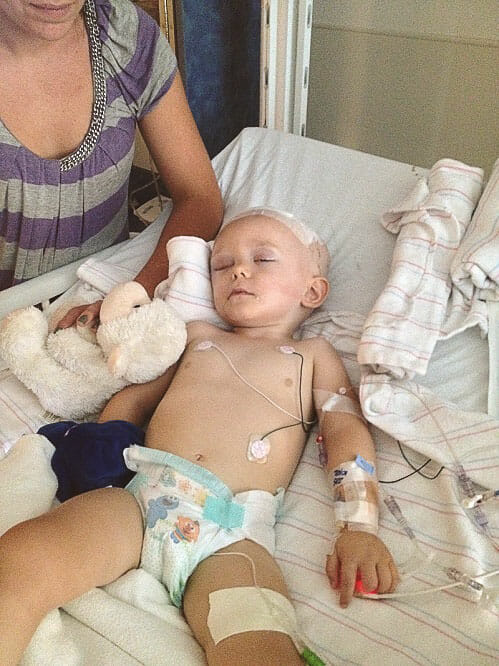 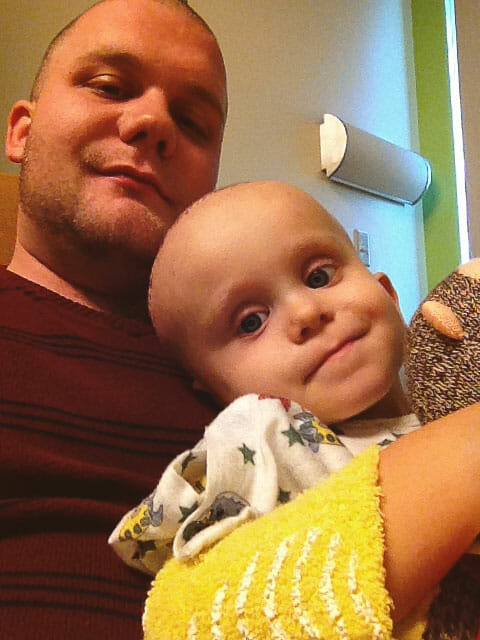