—And Now His Devoted Mom and Dad Are Fighting Back

A beloved two-year-old boy with vibrant blue eyes that smiled at everyone had his life abruptly ended by a deadly pathogen that wreaked havoc on his little body in a hospital bed.

In the dreadful aftermath, Grayson’s parents, Kayla and Brent, are left with broken hearts that will never heal.

But this dynamic, loving couple is passionately committed to keeping Grayson’s memory alive and helping others. Through the Grayson Dunham Foundation, Kayla and Brent are using their voices to advocate for food safety by sharing Grayson’s story.

Today, we invite you to learn more about these friends of Stop Foodborne Illness with our Q & A below. And, ultimately, we hope what you read touches your heart and awakens a desire to join us all in our quest to prevent others from suffering like Grayson did. 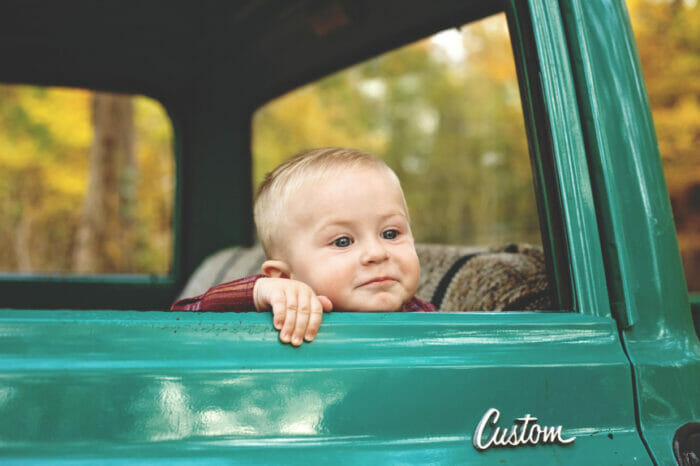 Q: Kayla, tell us about the tragic loss of your son, Grayson, to hemolytic uremic syndrome caused by E. coli poisoning.
A: On Wednesday, August 10, 2016, Grayson woke up and began vomiting and had a bad bout of diarrhea. The next day, he suffered the same symptoms. My husband, Brent, and I just thought he caught a little bug. We weren’t too worried. We kept him comfortable and figured he’d feel better soon, but we took him to the pediatrician just to be safe. There he was diagnosed with stomach flu.

But, Friday evening he got worse.

Grayson was feeling very uncomfortable and in pain. We thought we’d see how the night would go and take him back to the pediatrician first thing Saturday morning. Later that evening, though, he was up with persistent pain—and we noticed blood in his stool. Saturday morning we visited our pediatrician and, with Grayson’s constellation of symptoms, we were advised to head straight for Indiana University’s Riley North Hospital for Children in Carmel, IN, near our home.

While at Riley North, they gave Grayson fluids, did chest and stomach X-rays/ultrasounds, took a stool sample, and tried to keep him comfortable. But our little guy was in serious pain. And the diarrhea was constant—Grayson was going every 10 minutes through the night.

The doctors had a hard time determining a diagnosis. We were first told it could be intussusception, a condition in which the intestines fold into themselves and cut off blood supply to affected parts. Next, they said it may be Henoch-Schönlein Purpura, which causes inflammation of the blood vessels.

With no definitive diagnosis, and as we watched our sick son get worse by the minute, Brent and I were extremely frustrated and scared.

On Sunday evening, we were transferred to Riley Hospital in Indianapolis where a pediatric surgical team would be ready to go if needed. Before we left, though, they did another ultrasound and discovered his appendix was enlarged.

Still in a great deal of pain, Grayson arrived at Riley Indianapolis where they did another ultrasound only to discover that his appendix was NOT enlarged. Instead, we were told his colon was inflamed and colitis was the next diagnosis.

This was getting crazy. We were losing faith. And our little boy wasn’t getting better. Was colitis really the problem? Was there something else going on? We had so many questions and were worried sick.

Our worrying only intensified when they transferred us to the ICU. Grayson’s stomach was hardening, he was very irritable, and he wouldn’t let us touch him in any way because his pain was so severe.

Next came another diagnosis: Hemolytic uremic syndrome (HUS), a serious, life-threatening kidney disease. At this time, we also got word from Riley North that his stool sample had tested positive for E. coli (and we later learned from our state’s board of health that it was a Shiga toxin-producing strain—one of the most deadly types).

This time, they told us, they were positive that HUS due to E. coli was what Grayson was suffering with. His pain was so severe now. Multiple doses of strong medication didn’t even cut the pain. This was agonizing for us to see. Brent and I felt so helpless.

With HUS, Grayson’s kidneys weren’t functioning normally so dialysis was ordered for the following day (Monday), along with surgery first to put in a central line for dialysis. This would give his kidneys and body a chance to rest.

While we sat with our sweet Grayson on Sunday night, they inserted a  nasogastric tube, which helped release tons of fluid and softened his tummy. After the fluids were released, we saw glimmers of hope when Grayson started to talk more and watch some YouTube videos. And his pain had decreased dramatically.

We felt like we had finally turned the corner and figured Grayson would be getting better.

Next, doctors told us they wanted to sedate him and put in a breathing tube so Grayson could relax and rest before his surgery the next day. This seemed to be working wonders for some of his vitals—specifically blood pressure and heart rate, which had been extremely high (due to HUS). Once sedated, his blood pressure went down, his heart rate steadied, and his oxygen level was perfect.

But, after a few hours with the breathing tube in, his hemoglobin dropped from normal to nearly zero. And the doctors couldn’t get his heart to pump on its own.

Grayson’s life was hanging by a thread at this point.

But our precious baby boy was gone.

They couldn’t save him.

Grayson passed away on August 15, 2016 at 4:30 am after just five days of sickness and less than 10 hours in Riley Hospital’s pediatric ICU.

Q: From a food safety standpoint, do you feel there’s anything that could have been done to prevent Grayson’s death? How about medically?
A: That’s tough because, unfortunately, we don’t know where Grayson contracted his E. coli infection.

It could have come from an animal or food, but we aren’t sure. In the days leading up to his illness, we visited our state fair where we were around animals, ate at a few restaurants, and enjoyed food prepared at our home, too. So, it’s very hard to say just where the infection originated.

From a personal perspective, I feel we did everything we could as far as food safety goes. I’ve always been very diligent about making sure all of us wash our hands after touching animals and that our food is handled and cooked safely at home.

But, tragically, even one little mishap somewhere along the line in the food industry can doom a darling baby like Grayson to his death.

Now, from a medical standpoint, looking back I see there are a few things that could have gone differently to help my Grayson have a better shot at living through this nightmare.

But, before I get into that, I want to say the medical team that cared for Grayson was one of the best. They were extremely caring people with huge hearts who cried with us when Grayson died. And, during the entire time he was treated at Riley Indianapolis, they never left his side. I truly feel that, based on the knowledge they had, they did everything they could to help Grayson.

I’ve played it over in my mind a hundred times … could one thing in particular have made a difference and saved Grayson’s life? I often wonder this: because of the time it takes for a lab to process a stool sample, if we had gone in right when the diarrhea started, and a stool sample was ordered sooner at the ER (or even the pediatrician’s office), would results coming in sooner have given us the chance to catch it earlier, start him on dialysis, and give him more effective treatment?

I’ll never know, and these questions haunt me when I think about them.

Q: To other parents of small children like Grayson, what is your #1 recommendation for how they can keep their children safe from foodborne illness and/or E. coli infection?
A: Stay on top of food recalls!

You can sign up online here  and get emails directly to your phone.

Also, I’ve got a list here of some of my top tips:

Q: Your positive attitude and strong commitment to helping others is incredibly inspirational and heartwarming. What gives you the kind of motivation you have each day?
A: When Grayson passed away, I was 17 weeks pregnant with our second child, Graysie. Being pregnant with her truly kept me going.

When you lose a child, going on with your life without your child is the worst. The pain and suffering and heartache rips you to pieces.

For me, I knew I had to be strong so I could continue to have a healthy pregnancy. Yet the grief I felt was overwhelming and extremely hard on me every single day. One thing was for sure, though: I never wanted Grayson to be forgotten. Talking about him and sharing memories gives me strength and helps me feel that his passing has purpose.

Q: How did you learn about Stop Foodborne Illness and how do you see your Foundation becoming involved with our work?
A: I found Stop Foodborne Illness when I was online doing my own research on food safety and E. coli. I became inspired by this organization’s far-reaching and life-saving work. I especially love its focus on putting faces and stories of real people to foodborne illness. I have big dreams for the Grayson Dunham Foundation and, although I’m new to my work with it, I’m excited to explore ways we can team up with Stop Foodborne Illness to strengthen and grow our similar missions.

I love children, as you can probably guess! So, one idea I have is the possibility of working together on educating kids on food safety. I feel it’s VERY important for kids to know proper food safety practices. Parents aren’t with their kids 24/7 so they need to know what to do when they’re on their own.

Q: For our readers who want to get involved in promoting food safety, what advice would you give them about how best to get started?
A: I recommend people get active with key food safety advocacy groups like Stop Foodborne Illness. Here are a few ways you can take action right now.

One simple thing you can do right away, too, is read the  fact sheets  made available from Stop Foodborne Illness, and follow the food safety practices they spell out. They’re simple, but they work! And we should all be following them.

Grayson Dunham passed away on August 15, 2016 at the tender young age of 2 from hemolytic uremic syndrome due to an E. coli infection. He had the most beautiful blonde hair and blue eyes and an infectious smile that could light up the room. Grayson’s legacy is carried on by supporting others through the Grayson Dunham Foundation, which was established by his parents, Kayla and Brent Dunham.