Why Dr. Ben Chapman is Drawn to Food Safety

When you read his stuff, get an email from him, or spend some time talking with Ben, you instantly get the sense that this guy operates a little differently.

And that’s precisely why we like him so much!

At Stop Foodborne Illness, we’re now proudly calling Ben a board member, and we caught up with him recently to get more scoop for you on this force of nature in the food safety world. 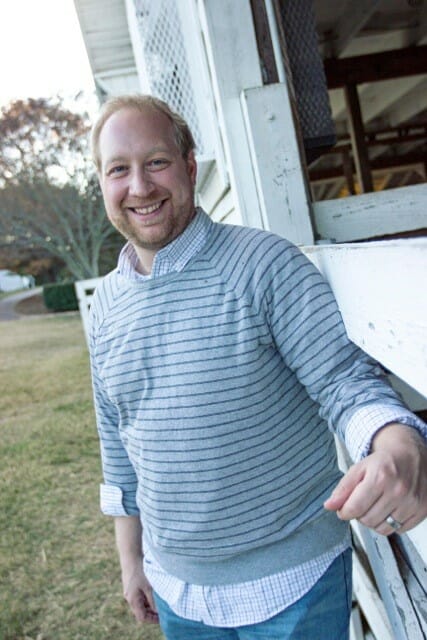 Q: So, first off, how did you find yourself dedicating your professional life to food safety?

Had I not emailed my graduate school mentor, colleague, and friend Doug Powell in the winter of 2000 looking for an on-campus summer job (while an undergrad at the University of Guelph in Ontario, Canada), I’d be some other kind of nerd. Actually, I’d probably be a fantasy football blogger or Starbucks barista.

Side note: Doug Powell is a former professor of food safety and publisher of www.barfblog.com.

My story would be a lot cooler if I had sought out Powell as a potential employer because I was interested in the stuff he did.

But that’s not the case.

I had no idea what he did — and being a bit of an idiot, I didn’t even bother to look it up.

I emailed Doug on the advice of a friend who knew I was desperately looking for a job. He didn’t tell me much else about this dude or what he filled his days with. My friend just said, “I think you two will get along.” I didn’t really know what that meant, but I had no other prospects.

So, I clicked send on that email to him.

And he hired me to pull news.

Pulling news meant I surfed diligently through the interweb for anything food risky: microbial food safety, GMO foods, animal disease, etc. The stories I found (along with other news pullers) became content for FSnet, the precursor to barfblog, and the other listserv postings Doug put together every day.

This was real life. Seven people died and over 2,300 fell ill. It hit me hard because I knew some folks from the town.

I was already interested in disease (probably because of the movies Outbreak or The Hot Zone), but the coverage and discussion within the Powell lab around Walkerton – how the outbreak was handled and communicated to the folks drinking the water – drew me in. The field of risk communication, where the technical info and real people intersect, got me fired up.

I made my move from molecular biology and genetics to food safety. That’s where it all started.

That news-pulling gig spurred me on to pursue an MS degree in food safety, which led to me working with farmers to shape and evaluate an on-farm food safety program.

Then I got my PhD where I focused on hand washing and cross-contamination in commercial kitchen settings. Both degree projects were about evaluating what works to change behaviors and exploring different messages/delivery methods based on the best available food safety and communication evidence.

After those projects, I spent time conducting applied and action research leading to extension outputs. That’s just a fancy way of saying I’ve become a food safety voyeur and storyteller. What really matters, and is central to any food safety intervention that targets behavior, is not what people say, but what they actually do.

To get at what’s really happening, food safety folks must gain access to real life situations. They need to observe and understand systems. And then they need to design something to address risk.

Research says that, for something to connect to someone, it has to be specific, timely, compelling, and provide a control method. This can be done through constructing a narrative, or story, around a situation. Once some intervention is made, evaluating the effectiveness is often forgotten. Lots of effort goes into designing things. But not as much effort goes into figuring out whether the creation worked.

Thinking back, as an undergrad, I didn’t really know what I was interested in. But, by chance, I found a problem that connected with me personally:

There are too many sick people.

By exploring different venues within the food system, and having super mentors who supported my interests and ideas, I found a deep passion for exploring food safety solutions that can reduce sickness and save lives.

Q: You’re now Associate Professor and Food Safety Extension Specialist at North Carolina State University (NCSU). How did you come to work there and what’s a day in the life like?

A: I knew that food safety extension was the place for me. I thoroughly enjoy taking the science to the people in restaurants and grocery stores, on the farm, and in their homes so they can reduce public health risks.

In 2008, a position came available at NCSU, and I knew a few people here. I applied, was lucky enough to score an interview, came to Raleigh, and loved the vibe of the department, college, and university. I was offered the job and jumped at the chance. My colleagues – inside and outside of the university – have made it a fantastic place for me to land. My days are pretty varied, and that’s what I was looking for.

Q: We love barfblog.com –  How did you come up with that name and what do you set out to accomplish for your readers?

A: When self-publishing was all the rage, we decided to start a forum to share foodborne illness stories.

Every time we talked to someone on a plane, train, or automobile and they found out we did food safety stuff, they’d share their worst foodborne illness story. barfblog.com was created to capture those stories. But, most people don’t want to be bothered with the writing, so we do it for them.

The idea was (and still is) to take current news items and highlight what we think is important, based on the literature and our experiences.

One day, after an afternoon pick-up hockey session, Doug and I had a few beers with our group and some government/professor friends, and we brainstormed names.

I can’t take credit for the name at all. A creative undergrad student, Christian, came up with “barfblog,” and it stuck.

Doug Powell is really the driving force behind the content. I chime in when I can, and I host the blog over at NCSU. It’s a collaborative. We both really care about having less sick folks. And we enjoy doing our part to help meet that goal through sharing stories that, we hope, get people changing food safety habits for the better.

Q: You regularly use humor in your dialogue. What inspired you to take that approach, particularly since foodborne illness is so often discussed in a serious manner?

I don’t make light of illnesses, and I’m careful about when I drop a joke in to my writing. I guess I use humor because that’s who I am: A guy who thinks he’s funnier than he probably is!

No matter how I write or talk, though, my hope is that people know I’m very affected by and empathetic toward people impacted by these nasty bugs. Humor is a good tool, I think, to relate and connect with people. That’s really my goal with humor.

Q: You use social media extensively to spread your messages and get people taking action. What are some tips you have for our readers in this area?

A: The focus of barfblog.com and all my social media activities is to create dialogue and engage folks in discussions on what causes people to get sick from food. That includes food safety nerds in industry, academia, and government and everyday people who cook and eat food.

My top tips for social media:

The posts I like the best are the ones that come from incidents/situations that affect me. A few weeks back, I wrote about the Sabra hummus recall (due to Listeria). As a dad of a 4-year-old and a 6-year-old, I got this weird feeling of concern (because that’s the type that’s in our fridge). This was something that could have caused major harm to my family, so I wrote about what I think is missing from the recall notification. The social media discussion following that post has been really interesting to watch.

For a typical STOP reader, let’s say a mom who’s had a child affected by foodborne illness, I think social media can be very powerful. Let me repeat: VERY POWERFUL. Even if you’re not a pro blogger or regular “tweeter” on Twitter, there are many ways you can use social media to share your story and tips for preventing foodborne illness. One of my favorites? Video. Create a video, post it on YouTube, and share it via other social media outlets like Facebook and Twitter.

Remember, people love to hear from and connect with other people who sound and act real and relatable. Vulnerability – sharing and showing the dark side of how foodborne illness has impacted your life – is something people crave (because that’s what’s real). And you want to be sure to use strong calls to action. Let people know what you want them to do.

Q: Share a little bit about your podcast, Food Safety Talk. What do you like to cover?

I get to chat with my friend, Don Schaffner, for a couple hours every week. We share five or six things we find interesting in the news that week and then just chat like we’re having a beer together (except we’re in two different states, usually one of us at home in our underwear). We’re both passionate dudes when it comes to food safety, so there’s no shortage of stuff to talk about. You can check it out here.

Q: As a new STOP board member, are you honed in on one or two personal goals you want to achieve during your term?

A: First, let me say it’s humbling being around a group of people who’ve either experienced foodborne illness directly or, support those who have, and dedicate their time, energy, and resources to reduce the likelihood that others will be affected.

As for specific goals, I want to raise STOP’s profile nationally and internationally and really focus on gathering the best data to inform policy issues. When you have good data, you can make more effective choices about how to prevent foodborne illness and save more lives.

As a teenager, a Saturday afternoon viewing of the classic cable movie, Outbreak, sparked his interest in pathogens and disease. With the goal of less foodborne illness, his group at NCSU designs, implements, and evaluates food safety strategies, messages, and media from farm-to-fork.