I was under the impression that E. coli could only be contracted by someone eating contaminated food. 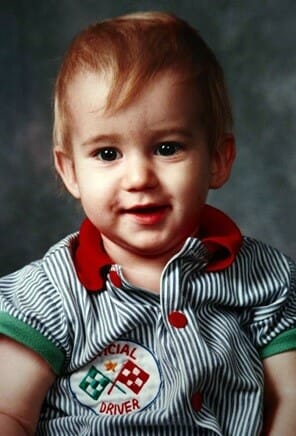 Letters, photos, ‘Get Well’ cards, and newspaper clippings sat in bags and boxes next to his empty crib. His dresser full of little boy clothes — a sudden relic of a life unlived. In the corner, a new pair of toddler shoes sat in a car seat as a cruel reminder of steps and journeys never to be taken. Riley Detwiler, my son, became a young casualty in the outbreak years later referred to as the ‘9/11 of the meat industry.’

There had been news reports of a foodborne illness outbreak in the Seattle area, which referenced a little-known bacteria called E. coli O157:H7. Investigators tied the outbreak to beef in hamburgers sold at Jack in the Box restaurants. All my family needed to do to keep safe was avoid eating at that fast food chain, or any restaurant in Seattle. Riley, who was only 16 months old, had never eaten a hamburger before and he sure wasn’t going to be eating any hamburgers now.

But in late January, 1993, after being exposed to an infected child in his day-care center, Riley developed symptoms of foodborne illness.  The other child, an 18-month-old boy, had eaten a contaminated hamburger but had only a mild bout with the illness. One day when I picked Riley up from his daycare center I saw – even though the outbreak’s focal point was 90 miles south of us – that the county health department had posted a notice at the center asking parents to watch for signs of foodborne illness in their children.

I was under the impression that E. coli could only be contracted by someone eating contaminated food, so the idea of it going from person-to-person was mind-blowing to say the least.

Late that evening, Riley was not his normal, active toddler self.

It started with bloody diarrhea. Early the next morning, he was in really bad shape, so I rushed him to the hospital and soon learned from Riley’s medical team that he was indeed one of 650 people known to be sickened in the E. coli outbreak across Washington, Oregon, California, Idaho, and Nevada.

After spending a few days in a smaller hospital, doctors had Riley airlifted to Seattle’s Children’s Hospital. He quickly went from being “under observation,” to having IV lines and monitors, to being transferred to the Pediatric ICU.  As he lay there helpless, I tried to sit as close as I could on his hospital bed and hold him. “How am I to comfort my child through something that not even the doctors fully understand?” I wondered.

The look of fear in his young eyes grew painfully deeper with every hour, but I was powerless to help. Riley and I both wanted to go home. When he wasn’t unconscious, he wanted comfort from his bottle, but I couldn’t give him one. With only a few words at his disposal, he kept reaching for the hanging bag of IV fluids and saying “Ba Ba” – his word for bottle. This was one of the last words I heard him say.

The next day, doctors performed exploratory surgery and removed a large portion of his colon. When they brought my baby back to his hospital room, the doctors couldn’t look me in the eye as they related how bad things were and that they’d placed him in a medically-induced coma. His eyes, coated with an ointment, remained closed. His little arms and legs arranged to serve as a bridge between his small body and the web of tubes and wires connected to towering machines surrounding his bed.

Meanwhile, a flurry of local news coverage led to brief national attention of the E. coli problem.  Many in media and government treated E. coli as a regional problem, of no concern to the rest of the country. Executives in the meat and restaurant industries, and government officials, announced that the outbreak was “over.” Several reporters, as well, reassured the public that the number of people getting sick was decreasing and it was safe to eat hamburger again in the areas affected by the outbreak. “Everything will soon be back to normal” they said.

But, the opposite was true.  Cases of children infected from secondary (or person-to-person) transmissions were increasing rapidly.  Doctors predicted that a second wave of victims — mostly children — could well outnumber those who actually ate the tainted meat.  The hospital arranged for special dialysis machines – designed for toddlers – to be flown in from other states to handle the load.

Every day, the news about Riley’s condition worsened. The doctors were specialists but the unanswered questions increased, while the numbers on the beeping and blinking monitors got lower and lower. I remember thinking to myself, “Riley looks as if he’s asleep. Maybe he will open his eyes and turn his head to look at me. Maybe he will say something. Maybe even, he’ll just cry.”

It didn’t happen.  Things got even worse.

His little body was now being ravaged by Hemolytic Uremic Syndrome (HUS), a kidney ­­disease associated with the most severe E. coli cases where red blood cells are destroyed leading to kidney failure.

On February 20, 1993, only 23 days after he became ill, Riley’s brief life of 17 months and two days came to an end.  Doctors said that massive brain hemorrhaging and multiple organ failure brought on by his infection was the final blow.

My family had lost.

In 1993, a Seattle Times article from the week after Riley died said that his story helped create a huge national awareness of:

It seems no one in America knew, at the time, what a seminal event this would turn out to be.  Words such as “E. coli” and “foodborne outbreak” have entered our social vocabulary and become commonplace. Even today, when national and international food policy conferences are discussing how we got to this point, the Jack in the Box E. coli outbreak of 1993 is considered the landmark event in U.S. federal food policy. 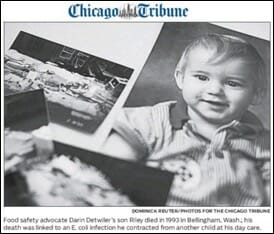