How could it be me… How did this happen?. 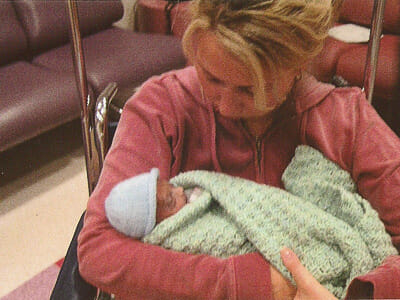 My husband and I tried well over a year to have a baby. At the time I worked in a Hospital as an Ultrasound Technologist in a High Risk OB department. All day long I told people if they were having a boy or a girl. Finally, we became pregnant ourselves. I know more than the average pregnant Mom, on things that can go wrong. I also knew how blessed we were to have finally conceived.

At 30 weeks I woke up like a cat with its back up, I felt like something was wrong. I hadn’t felt the baby since the night before. I drank juice, I ate, nothing. I had the key to my department at work. My husband and I went and I scanned myself. The baby was still, no movement, for 45 minutes we watched. I called my doctor he told me to come up to the third floor. As the hours went by, I started contracting. I was given tributiline to stop the contractions, nothing stopped them, after 3 shots, I was still contracting. By the next morning, still no movement, I was given steroids to prevent brain bleeds, and for lung maturity. They wanted to keep me pregnant as long as possible. It takes a couple of days in your system for that to work. But right after the shot of steroids my doctor looked worried as he listened to the NST monitor and he took my wrist, listened, and said, “Break open a room, the heart rate we hear is Stephanie’s pulse.” With that I had an emergency crash section.

I awoke with no happy faces, just sadness. No one spoke. My first words were, “Did I have a boy?” They told me yes. “Is he alive?” They told me yes. My son Michael was born October 17, 2004 with an APGAR of 2. My first born, my husband’s namesake, a beautiful baby boy. I was told later on that day he had bleeding in his brain and he couldn’t breathe on his own, he was intubated and brain dead. I was told best case scenario he would live with a wheelchair and be at a risk of aspirating on his own saliva.

The head of infectious diseases came to see me; he told me it was Listeriosis. No, it couldn’t be, I knew what to eat, I told my pregnant friends not to eat certain things because I knew the damage Listeria could do, I only saw it happen once in the 10 years I worked there, but I knew. I told him, “No, I didn’t eat soft cheeses, no cold cuts, nothing from a deli, it can’t be, you’re wrong.” He said, “Did you eat salad? It can be on lettuce, and is almost impossible to wash off.” I had no idea. Every pregnant woman eats salad. Every pregnant woman eats out. Every pregnant woman is so tired they want to treat themselves to a meal they didn’t prepare and cook themselves. Everyday I got salads from a “health” food store for lunch. I didn’t need a lesson on empathy or sympathy; I took care of people all day long with tragedies similar to this. How could it be me being wheeled into the NICU to kiss my babies forehead? How did this happen? I helped in diagnosing and helping people with sick fetuses. And now I was in a situation where I turned to my own boss and said, “You help everyone else, please help me.” And he couldn’t, he just put his head down.

Michael died in my arms as I rocked him to sleep, wrapped in a not-yet-finished blanket my Mom had been knitting for her first Grandchild, October 19, 2004. He was buried in that unfinished blanket; I felt it was perfect, because he wasn’t finished yet as well. All because I ate lettuce that was contaminated with a bacteria, a bacteria that is silent. No smell, no bad taste. I had no symptoms either. I was so sick with my pregnancy, every day all day long I vomited; I couldn’t even tell if I had food poisoning. I was told I was minutes from losing my uterus, the bacteria was all through out the baby and my placenta, contaminated through to the maternal side. I was told I almost lost my life. I started becoming septic right before delivery. My “body” recovered quickly, my heart slowly. I unbelievably became pregnant 2 months later, against advice from my Doctors, but I knew I couldn’t live with empty arms. And we truly thought it would take us over a year again to get pregnant. We went on to have our daughter Brooke Hope, September 2005; she gave me back my life. And then another boy, Jake Nicholas, December 2007, he gave me back my smile.