Everything seemed normal, so back home I went. I awoke after a restless night and my cramps had worsened. 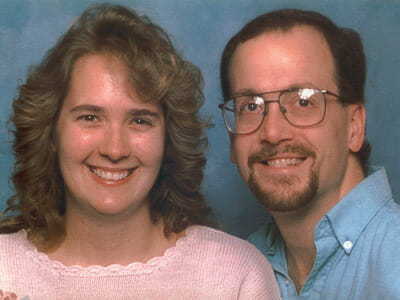 August 1st, 2000 — a home pregnancy test confirmed what I already knew; my husband Steve and I were going to have a baby! I was so excited. Talking to Steve on the phone (he was out of town) I could hardly contain my happiness. We were so looking forward to starting a family and being parents.

I read every book I could get my hands on to learn about the development of the baby growing inside of me. At night, I would share interesting tidbits with Steve. An amazing thing was happening to us, and the date had been set. April 10, 2001 (give or take a couple weeks) our lives would change forever.

Just nine weeks pregnant, on September 11th we heard our baby’s heartbeat. The rapid shwoosh, shwoosh was so comforting and awesome. I had managed to avoid any signs of morning sickness and other than feeling a little tired I felt great. I was taking good care of myself, eating right, continuing exercise class, avoiding cigarette smoke, alcohol, medicine, and anything else that was even remotely linked to causing damage to a growing baby.

We had decided not to start on the baby’s room until after the 1st of January. But things already started gathering in the corners. Books, toys, hand-made blankets and mittens, little baby things started pouring in from family and friends. April 10th seemed so far away.

On Monday, September 25th I skipped aerobics after work because I had a slight neck ache and the chills. I left work early Wednesday after throwing up twice and feeling achy and tired. My neck ache hadn’t gone away and I had a fever on and off of about 100 degrees. Thursday night Steve was cooling me down with cold compresses on my forehead and under my armpits. Friday, September 29th, we headed for my doctor’s office.

The Dr. asked me to turn my head all around, which I did with minor discomfort. He then listened to my breathing and my heart — everything seemed normal. I had a slight cough but no sore throat or stuffy nose. We listened to the baby’s heartbeat again, the reassuring shwoosh, shwoosh seemed to say everything would be okay. He then had the lab check my white blood cell count to see if there was an infection; no, that was normal too. So, home I went with a diagnosis of upper respiratory infection. Over the next few days, I had a fever on and off. One day I felt great, the next day I felt like crap. I threw up again Sunday morning. It seemed strange to start having “morning sickness” so late. I missed work again on Monday, but Tuesday and Wednesday I was feeling pretty good. I told everyone at work that I was expecting in April. I wanted to wait until I had passed the first trimester mark to make sure things were going to be okay with the baby.

Wednesday night my temperature soared to 102.6 degrees. I went into the ER, where my temperature was normal. They took a blood culture, gave me an IV, took chest x-rays, and sent me home. Later that night, I noticed a clear pinkish discharge and had mild cramps. We went back to the ER where my Dr. did a pelvic exam and checked for fetal tissue. Everything seemed normal, so back home I went. I awoke after a restless night and my cramps had worsened.

Around 7:30 a.m on October 5th, 2000 I miscarried a perfectly healthy baby girl. I was 13 weeks pregnant. At the hospital, the Dr. told me they suspected Listeria, a bacterial infection. Later that day, it was confirmed that that is what had caused me to lose the baby. The 24+ hours I spent in the hospital were horrifying. I had never been to the ER, never been hospitalized, never had an IV, never had surgery, or anesthesia, before this.

As the day wore on and my placenta refused to come out on it’s own, the reality of surgery and facing my fear of anesthesia became eminent. I was so miserable by 7:00 p.m. that night, I didn’t really care if I lived or died. When they wheeled me into the operating room, my temperature was again 102.6 degrees, dangerously high for an adult.

After the surgery and IV’s of antibiotics, I felt much better physically, but the emotional agony had just begun. Why me? Why us? What did we do to deserve this? What did I eat? How did I get this terrible bacterium that killed our baby?

Zena Rose Spitz — we loved her so much and hadn’t even met her face-to-face. But her memory and thoughts of what could have been, what should have been, will live on forever. Since losing Zena, I have searched everywhere for information on Listeria. I’ve written letters to medical associations urging them to be on the lookout for the mild but deadly symptoms of Listeria. Two recalls have been issued since October 5th, but my Listeria bacterium does not match either of the recalled bacterium. The state can do a fingerprint of each strain of bacteria to see if there are any matches.

Everyday I wonder what it is that I ate that killed our little girl. Why didn’t anyone tell me about Listeria, tell me to avoid lunchmeats, soft cheeses, etc? Or at least tell me to take seriously a mild neck ache and mild fever because it could be life threatening to my unborn child and me? They tell pregnant women about everything under the sun — don’t drink, smoke, take medicines, empty cat litter boxes, etc… But not once did I hear about Listeria. It’s not mentioned in any of my pregnancy books. Why not? Pregnant women are 30 times more likely to get Listeria than the average person is. Isn’t that reason enough to inform them about it and tell them how they can minimize their risk?

People ask us, “when are you going to try again?” and I get upset. I sometimes cry when I see little girls playing. I cry when I hear about Listeria recalls. I cry when I wake up at night after dreaming about Zena. I cry when I get my period; a powerful reminder that I’m no longer pregnant. I’m petrified at the thought of being pregnant again, afraid I’d starve myself, not knowing what foods are safe and what foods to avoid. I want to be happy about being pregnant, not scared and worried for nine months. I can’t replace this child, and I don’t want to, but I do want to have children and I know Steve does too. My emotions have been on a roller coaster since losing this child. Hopefully, someday, I will be able to look past the pain and see a positive future.

I wanted to share my story with others to increase awareness of this horrible disease and do what I can to prevent it from happening to others. I would not wish what happened to me and Steve on my worst enemy and I can only hope that companies will wake up and start making better decisions about food safety.