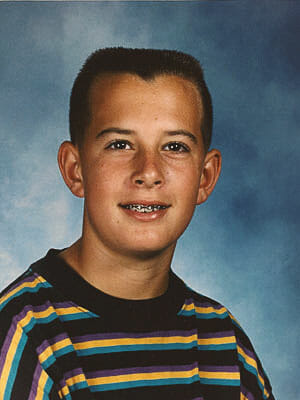 Hello, my name is Rainer Mueller and I have traveled here from Oceanside, California. I am currently on the national board of directors of Safe Tables Our Priority (STOP).

More than anything in the world, I wish I didn’t have to be here. . . but I do. No, I’m not afraid of Washington, DC or public speaking. I wish I didn’t have to be concerned about E. coli O157:H7 or this organization called S.T.O.P. I wish I could be home with my family enjoying the warm California sunshine. But I can’t. You see, I’m a victim of E. coli. Oh, you can’t see any outward signs? You probably won’t. Why? Because on November 3, 1993 my thirteen year-old son, Eric Jackson Mueller, died after eating an E. coli-infested cheeseburger from one of the national burger chains in his own hometown of Oceanside.

My son paid the ultimate price for eating one of his favorite foods. And this is in a country rapidly approaching the 21st century, considered by many to be a world leader. But its meat inspection laws are holdovers from the 19th century. Could you imagine if the FAA still utilized the same aviation regulations from the age of the Wright brothers with today’s jet travel? Consumers wouldn’t stand for it! And so it is now with government meat inspection.

Death by E. coli and hemolytic uremic syndrome is a very painful and tortuous death. As a parent standing by an watching my only son go through incredible agony and pain before he lost consciousness and died, was something I don’t even wish on my worst enemy. Immediately before slipping into unconsciousness, Eric screamed, “Get my dad!” Those were the last words he ever said. I couldn’t do anything for him. I am haunted daily by this incredible, totally senseless tragedy.

Although I am the son of surgeon and served a hospital corpsman in the United States Navy, and my wife, Marianne, a daughter of another surgeon, my trust with the medical professional has been totally shaken. The day Eric came down with bloody diarrhea, I rushed him to our clinic were he was diagnosed with appendicitis. He was immediately admitted to our local hospital where an appendectomy was performed. His appendix was totally normal. Baffled, the doctors ordered culture tests which then erroneously detected amebiasis. With this diagnosis Eric was prescribed the powerful drug, Flagyl, and two days after his appendectomy, he was sent home. This was a Friday night. He wasn’t getting any better during the weekend, in fact he was getting sicker and sicker.

My wife, a former pharmacy technician at the same hospital, all along suspected E. coli because less than a year earlier a six-year-old girl from a neighboring community died under extremely similar circumstances. That girl was Lauren Rudoph, and her mother, Roni, is also here today. Marianne continually expressed those concerns to the doctors treating Eric, but because the lab tests didn’t show an E. coli, her concerns were dismissed as those of a frantic mother.

On Monday morning my wife called the doctor’s office, informing him that Eric wasn’t getting any better, and seemed to be getting worse. These concerns were dismissed as post-operative symptoms. Finally, after the third phone call to the doctor’s office, the doctor relented and told her to bring him to his office. Upon examination, Eric was immediately readmitted to the hospital. His health was steadily declining, and his kidneys were beginning to fail.

As I was to learn later, this is the first sign of hemolytic uremic syndrome, also known as HUS.

The doctors at our local hospital were still baffled as to what was happening with Eric. In desperation we called in Eric’s pediatrician who had known him all his life. He knew things weren’t going right, and that the drug Flagyl wasn’t doing anything for him. And after two days he ordered Eric transferred to Children’s Hospital in San Diego, where he was admitted to the pediatric intensive care unit, under the care of the chief of pediatrics.

That first evening in P.I.C.U., the chief of pediatrics and another doctors consulted with me at the foot of Eric’s bed. He’s got HUS they said, but nowhere in the medical records anywhere could they find a single confirmed case of amebiasis causing HUS. They remained baffled.

I would later learn from Eric’s medical records that the initial amebiasis culture was never duplicated on any subsequent tests. I would also learn that unless the latest state-of-the-art tests for E. coli, called polymerase chain reaction (or PCR) tests, were administered, the percentage of false-negative readings for E. coli were very high. The PCR test checks for the DNA in the toxins created by E. coli and has an accuracy approaching 100%. The reagents for these PCR test are between only $6 and $8, yet I have not been able to find a single medical facility in the United States regularly performing these tests, except for the CDC in Atlanta, and they will only run the test if they fear a massive outbreak.

Children’s Hospital continued to treat my son for amebiasis with Flagyl in increased dosages, but no there was no improvement. Then, Eric started receiving kidney dialysis, but he was still going downhill. And less than 60 hours after he was admitted to the hospital he lapsed into the coma from which he would never awake. He was placed on a respirator, and that evening he was again operated on, this time for an ileostomy and a brain shunt to relieve pressure from brain swelling. By the time they were finished with Eric, he had a dozen different tubes, IV’s, and monitors stuck in his body.

Two days after becoming unconscious, the chief of pediatrics had a conference with our family and told us that this amebiasis was a “red herring.” Yet they continued to treat him with Flagyl. I was to learn later in reading the Physician’s Desk Reference (or PDR) that Flagyl should be immediately discontinued upon the presence of neurological symptoms, something Eric was suffering from up until his seizure and coma. The team of doctors decided that their next step would be a total replacement of all his blood. Which they were going to start immediately. But when they got to Eric’s bedside, they discovered that his heart was rapidly failing, and that he probably on had another 15 minutes to live. With that they placed him on a heart-lung machine.

The following night, Marianne had a vision while praying with our 11-year-old daughter, Nikki. In this vision she saw that the Flagyl was killing Eric. Marianne immediately called the hospital and demanded that they discontinue it. The staff balked, and said they would wait until the following morning and discuss it with the chief of pediatrics. No, my wife insisted, she knew her rights and demanded they immediately discontinue the drug. The staff complied.

The next morning, when Marianne went to the hospital, was the first positive sign had seen during the entire two weeks of Eric’s treatment. His fingers and toes were beginning to warm up again, and there was some reaction to light in his pupils. Finally, a ray of hope.

But those hopes were dashed later that afternoon when we were informed of the brain function tests performed by a neurologist. Eric, who had been his class president, on the school’s honor roll, captain of his soccer team, assistant coach of Nikki’s soccer team, member of his school’s surfing team, member of the school bank, and member of the city’s all-star little league baseball team, was now a vegetable.

After a conference with the doctors and our family, on November 3, 1993 we decided to remove Eric’s life support systems. He died a short time later.

His funeral was one of the largest ever held at the mortuary. On the grounds of his junior high school now stands a palm tree and a large burial plaque with a dedication to Eric by his classmates and pictures of a surfer, a trumpet, a soccer player, and a baseball player. On the grounds of his elementary school is a stage with a plaque dedicated to Eric. Both of these dedications are unique to both of these schools.

I used to serve on the board of directors of our local Jaycees, our chamber of commerce, and soccer club. I served two terms as the president of Eric and Nikki’s elementary school PTA. But today I am only affiliated with one organization, STOP Eric’s life was tragically and needlessly cut short. But I have made it my mission that Eric did not die in vain. I never want to see another person suffer like Eric did. I never want to see another family go through the agony our family continues to go through today whenever we walk past Eric’s bedroom, see his photograph, or hear the name Eric. Eric’s friends no longer stop by. I know it’s too hard for them.

The meat industry states it may cost $250 million if meat inspection laws are updated. Eric’s hospital care cost $250,000. If his care was average, and 5,000 people a year die from contaminated meats, then we are spending $1.25 billion a year just to treat those who die. Add to that the cost of the other 97% of the people who survive food poisonings, and you can see that $250 million is just a drop in the bucket in the overall scheme of true costs alone.

I am convinced that every one of the 250 million Americans would gratefully spend an additional one dollar per year to bring the meat inspection standards ninety years up to date. If I could, I would pay the entire $250 million myself, if it would bring Eric back.

There are no excuses for these outdated laws, only pain and agony.

~ Testimony of Rainer Mueller, entered into the Congressional Record in February 1995