Everything I enjoyed three years ago, before the Salmonella, has come to a stop. 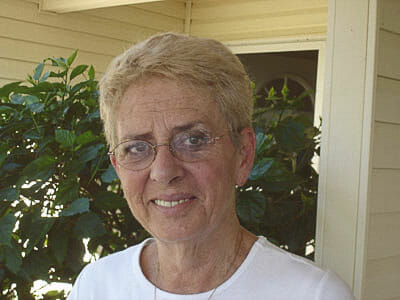 Three years ago I was an active 63-year-old grandma. When my husband and I weren’t babysitting, we were enjoying our grandchildren’s baseball and football games. Refinishing furniture, painting, and gardening were hobbies that I enjoyed in our retirement community.

I remember it like it was yesterday. What started out as a light dinner on a Thursday evening at a local restaurant, ended up a life-changing experience. Little did I know that my three-egg special would be a serving of Salmonella.

The following morning I got up with diarrhea, nausea, and cramps. Taking over-the-counter medication did nothing for me. I spent most of the day in the bathroom. The next day was worse. Still with the diarrhea, vomiting, fever, and feeling so weak I couldn’t stand, I thought I was going to die. My husband called for an ambulance.

After three days in the hospital on IVs, blood tests, stool tests, and x-rays, an infectious disease doctor came in and told me I had Salmonella. It was the eggs I had eaten. I was moved to isolation for another two days, then released to go home on antibiotics (Cipro). Thinking the worst was over, I was looking forward to feeling better, getting my appetite back, gaining my weight back and being as good as new. That was not the case. It was just the beginning of my problems.

A month later, not feeling any better, I was back to the doctor with continuing bowel problems. Still crampy, diarrhea, no appetite, and feeling weak, another stool test reveals I now have Clostridium difficile (C. diff). I go back on the antibiotics (Flagyl). A few weeks after finishing the antibiotic I continue to have bowel problems and a new complication of awful mouth sores. This mouth fungus comes along with the antibiotics and colon problems. I was put on Bentyl for the colon and Clotrimazole for the thrush mouth.

Still having up to thirty bowel movements on a bad day and eight on a good day, the doctor prescribes Levsin. I’ve tried different remedies that friends have recommended. I’ve tried acidophilus, brewers yeast, bran, Metamucil, Citracal, fish oil; nothing helped. I watch my diet. No matter what I eat or don’t eat, it doesn’t help me. My life revolves around my bowel movements. I’ve missed weddings, my grandson’s graduation and family get-togethers. I don’t make plans for the future because I don’t know how I will be on any given day. I’m getting depressed.

I was becoming housebound. When I did venture out with my husband, I had to know that there would be a bathroom nearby. I could tell you where all the bathrooms are in my county that are available to the public. I could handle traveling to my daughter’s house because I knew I could run in the Home Depot. It was half way between my house and hers. If I could go a little further, there was always McDonald’s. Most times when my husband was running an errand and asked if I wanted to go along, I usually chose not to. Too many times we were only a mile from our house and I would tell him to turn around and go back, and hurry. I needed to go again. I went as far a carrying a change of clothes in the car. It had me a nervous wreck trying to go out. It was a lot easier to stay home.

To add insult to injury, I have recurring urinary tract infections. The diarrhea, sometimes so bad that I can’t make it to the bathroom, and a woman’s anatomy, makes me prone to these infections. Since the food poisoning I’ve had nine UTIs. I keep an antibiotic in my medicine cabinet. Having had C. diff three times, the last thing I want to take is an antibiotic. The antibiotic can knock out the good bacteria in your colon and the bad bacteria takes over. This would leave me with another colon problem on top of what I already have. I’ve been there and I don’t want to go there again.

Colonoscopy after colonoscopy shows inflammation in the colon. The Salmonella has really messed me up. I’m prescribed different medicines to manage the flare-ups. When one medicine doesn’t work, I was prescribed another. I was on Entocort for two years, then Asacol was added, a few months after that another drug was added, Canasa. I was so frustrated because the flare-ups were getting worse. My stools are mostly mucus and blood. I wasn’t getting any better. I was hurting most of the time, had no appetite and was continuing to lose weight. I did more blood tests, stool tests, x-rays and scans. Some scans I’ve never heard of, but looking for relief, I would have gone through anything.

It’s now three years since the Salmonella and still having continuing bowel problems. I marked the anniversary by changing doctors with the hope that he’ll have some new ideas to handle my colon problems. Along with the Entocort, Asacol, and Canasa he has added a new medication. It’s called Imuran (azathioprine). Imuran lowers your body’s immune system and can lower the blood cells that help your body fight infections, but it’s also been known to help with my condition.

Everything I enjoyed three years ago, before the Salmonella, has come to a stop. The food poisoning has changed my life. I rarely get out much anymore. My life now revolves around my bowel movements. The Imuran takes a few weeks to kick in and I’m praying for good results, no bad side effects and getting my life back.

I will keep you posted and hopefully with good results.