Spend a Moment with Joe Ward 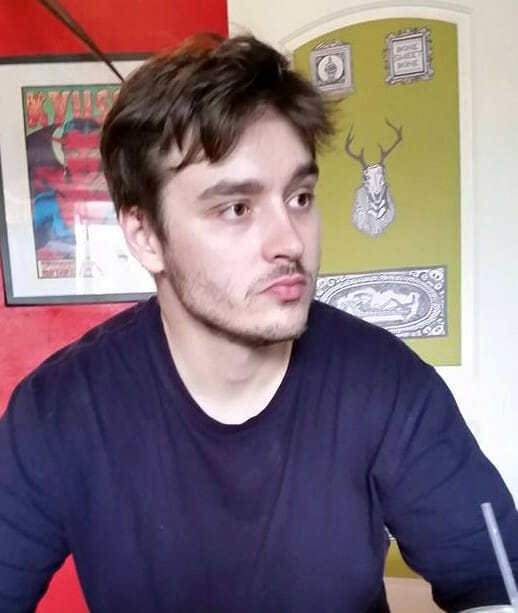 What I remember most about my brush with E. coli was the pain, because I have never felt something like that before or since my bout with foodborne illness. I often describe the pain of E. coli as akin to having a boa constrictor wrapped around your intestines. My digestive system felt like it was convulsing, and every constriction sent horrible pain shooting through my midsection. I swore I could see my intestines moving. It made sleeping impossible. At first, I didn’t know what was causing this pain, which made the situation much more terrifying. I thought I might have a parasite, and the idea of having an organism inside me was of great concern. After a few days, the E. coli diagnosis was actually something of a relief, especially after being tested for parasites and brain eating amoebas.

Has your experience shaped the way you think about food today?

Well, it took me years to gather up the courage to have another fish taco. (Which is what allegedly caused the poisoning.) More broadly, I have come to be distrusting of restaurants, especially take-out, fast-food leaning places. I used to never think twice about a restaurant’s appearance or cleanliness. Now, it’s one of the first things I look for when trying out a new place. It’s impossible for customers to get a true sense of a restaurant’s operation, since you often can’t see the kitchen. But there are clues I look for that tell me if this is an establishment I should trust.

My experience with E. coli has also caused me to develop irrational fears of certain foods. For example, I never order salads or produce at fast food places, even though I’ve never had a bad experience having one. (Produce, however, has been increasingly the cause of E. coli breakouts.) I have developed a phobia of undercooked meat. This is particularly a problem because my girlfriend is a food and drink writer, and so we eat at upscale restaurants constantly. So, I have to look away when the table orders beef tartare or a similar raw-meat food item. These places usually scoff at serving steaks well done, and it is embarrassing at times.

Tell us about a time when a consequence of your illness surprised you.

Honestly, it was the financial consequences of my illness that surprised me and impacted me the most. When I was sickened with E. Coli, I was a young reporter still trying to get on my own two feet. I had health insurance, but it basically only covered catastrophic events — of which this more or less qualified. Still, the illness cost me a lot of money. Foodborne illness can not only ruin someone’s health, it can also cause significant financial distress.

Because foodborne illnesses are entirely preventable. There are many components to preventing such breakouts — including regulations — but public education can go a long way to helping the problem. Stop Foodborne Illness does a great job of not only assisting the victims of these illnesses, but also of informing the public on the topic. If telling my story could help prevent people from getting sickened by their food, then I am more than happy to share my pain with the world.

What’s happening in your life currently?

Five years after my bout with foodborne illness, I am still reporting in Chicago. (Read more about my poisoning at the hands of my local taco stand here.) I also give speeches, sharing my story, on behalf of Stop Foodborne Illness. Outside of work, I am an avid reader of magazines, listener of music and walker of my dog, Scout (who makes a pretty hilarious cameo in my E. coli story)!