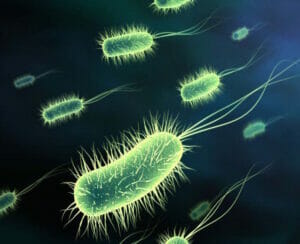 Some kinds of E. coli cause disease by making poison called a Shiga toxin. The bacteria that make these toxins are called “Shiga toxin-producing” E. coli or STEC for short. The most commonly identified STEC in North America is E. coli O157:H7 – often shortened to E. coli O157 or even just O157. Learn more!

When you hear news reports about outbreaks of “E. coli” infections, they are usually talking about E. coli O157. You might hear these bacteria called verocytotoxic E. coli (VTEC) or enterohemorrhagic E. coli (EHEC); these all refer generally to the same group of bacteria.

In addition to E. coli O157, many other kinds (called serogroups) of STEC cause disease. Other E. coli serogroups in the STEC group, including E. coli O145, are sometimes called “non-O157 STECs.” Currently, there are limited public health surveillance data on the occurrence of non-O157 STECs, including STEC O145; many STEC O145 infections may go undiagnosed or unreported.

What are the differences between E. coli O157 and other STEC?
Most of what we know about STEC comes from outbreak investigations and studies of E. coli O157 infection, which was first identified as a pathogen in 1982. The non-O157 STEC are not nearly as well understood, partly because outbreaks due to them are rarely identified. As a whole, the non-O157 serogroup is less likely to cause severe illness than E. coli O157; however, some non-O157 STEC serogroups can cause the most severe manifestations of STEC illness.

Who gets STEC infections?
People of any age can become infected. Very young children and the elderly are more likely to develop severe illness and hemolytic uremic syndrome (HUS) than others, but even healthy older children and young adults can become seriously ill.

What are the complications of STEC infections?
Around 5–10% of those who are diagnosed with STEC infection develop a potentially life-threatening complication known as hemolytic uremic syndrome (HUS). Clues that a person is developing HUS include decreased frequency of urination, feeling very tired, and losing pink color in cheeks and inside the lower eyelids. Persons with HUS should be hospitalized because their kidneys may stop working and they may develop other serious problems. Most persons with HUS recover within a few weeks, but some suffer permanent damage or die.

How soon do symptoms appear after exposure?
The time between ingesting the STEC bacteria and feeling sick is called the “incubation period.” The incubation period is usually 3-4 days after the exposure, but may be as short as 1 day or as long as 10 days. The symptoms often begin slowly with mild belly pain or non-bloody diarrhea that worsens over several days. HUS, if it occurs, develops an average 7 days after the first symptoms, when the diarrhea is improving.

Where do STEC come from?
STEC live in the guts of ruminant animals, including cattle, goats, sheep, deer, and elk. The major source for human illnesses is cattle. STEC that cause human illness generally do not make animals sick. Other kinds of animals, including pigs and birds, sometimes pick up STEC from the environment and may spread it.

How are these infections spread?
Infections start when you swallow STEC—in other words, when you get tiny (usually invisible) amounts of human or animal feces in your mouth. Unfortunately, this happens more often than we would like to think about. Exposures that result in illness include consumption of contaminated food, consumption of unpasteurized (raw) milk, consumption of water that has not been disinfected, contact with cattle, or contact with the feces of infected people.

Some foods are considered to carry such a high risk of infection with E. coli O157 or another germ that health officials recommend that people avoid them completely. These foods include unpasteurized (raw) milk, unpasteurized apple cider, and soft cheeses made from raw milk. Sometimes the contact is pretty obvious (working with cows at a dairy or changing diapers, for example), but sometimes it is not (like eating an undercooked hamburger or a contaminated piece of lettuce).

People have gotten infected by swallowing lake water while swimming, touching the environment in petting zoos and other animal exhibits, and by eating food prepared by people who did not wash their hands well after using the toilet. Almost everyone has some risk of infection.