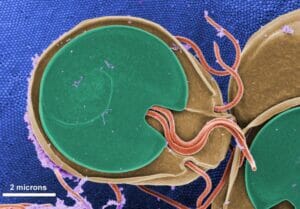 Giardiasis is a diarrheal disease caused by the microscopic parasite Giardia. A parasite is an organism that feeds off of another to survive. Once a person or animal (for example, cats, dogs, cattle, deer, and beavers) has been infected with Giardia, the parasite lives in the intestines and is passed in feces.

Once outside the body, Giardia can sometimes survive for weeks or months. Giardia can be found within every region of the U.S. and around the world.

How giardiasis is spread?
• Eating uncooked food that contains Giardia organisms
• Drinking water or using ice made from water sources where Giardia may live (for example, untreated or improperly treated water from lakes, streams, or wells)
• Swallowing water while swimming or playing in water where Giardia may live, especially in lakes, rivers, springs, ponds, and streams
• Swallowing Giardia picked up from surfaces (such as bathroom handles, changing tables, diaper pails, or toys) that contain stool from an infected person or animal
• Having contact with someone who is ill with giardiasis
• Traveling to countries where giardiasis is common

Intestinal symptoms of giardia infection
• Diarrhea
• Gas or flatulence
• Greasy stool that can float
• Stomach or abdominal cramps
• Upset stomach or nausea
• Dehydration
These symptoms may also lead to weight loss. Some people with Giardia infection have no symptoms at all.

Risks of getting giardiasis – People more likely to become infected include:
• Children in child care settings, especially diaper-aged children
• Close contacts (for example, people living in the same household) or people who care for those sick with giardiasis
• People who drink water or use ice made from places where Giardia may live (for example, untreated or improperly treated water from lakes, streams, or wells)
• Backpackers, hikers, and campers who drink unsafe water or who do not practice good hygiene (for example, proper handwashing)
• People who swallow water while swimming and playing in recreational water where Giardia may live, especially in lakes, rivers, springs, ponds, and streams
• International travelers
If you think you have giardiasis contact your health care provider.

Diagnosing Giardia infection
Your health care provider will ask you to submit stool samples to see if you are infected. Because testing for giardiasis can be difficult, you may be asked to submit several stool specimens collected over several days.

Treatment
Many prescription drugs are available to treat giardiasis. Although the Giardia parasite can infect all people, infants and pregnant women may be more likely to experience dehydration from the diarrhea caused by giardiasis. To prevent dehydration, infants and pregnant women should drink a lot of fluids while ill. Dehydration can be life threatening for infants, so it is especially important that parents talk to their health care providers about treatment options for their infants.

Can I get giardiasis from my pet?
The risk of humans acquiring Giardia infection from dogs or cats is small. The exact type of Giardia that infects humans is usually not the same type that infects dogs and cats.