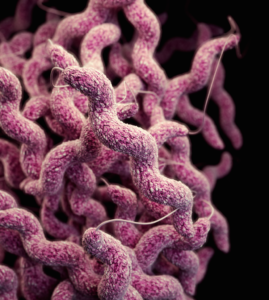 How do people get infected with Campylobacter?
Campylobacteriosis is most often associated with eating raw or undercooked poultry or from cross-contamination of other foods by these items. Infants may get the infection by contact with poultry packages in shopping carts.

Most people who get ill with campylobacteriosis get diarrhea, cramping, abdominal pain, and fever within two to five days after exposure to the organism. The diarrhea may be bloody and can be accompanied by nausea and vomiting. The illness typically lasts one week. Some infected persons do not have any symptoms. In persons with compromised immune systems, Campylobacter occasionally spreads to the bloodstream and causes a serious life-threatening infection.

Animals can also be infected, and some people have acquired their infection from contact with the stool of an ill dog or cat. The organism is not usually spread from one person to another, but this can happen if the infected person is producing a large volume of diarrhea.

A very small number of Campylobacter organisms (fewer than 500) can cause illness in humans. Even one drop of juice from raw chicken meat can infect a person. One way to become infected is to cut poultry meat on a cutting board, and then use the unwashed cutting board or utensil to prepare vegetables or other raw or lightly cooked foods. The Campylobacter organisms from the raw meat can thus spread to the other foods.

How is the infection diagnosed?
Campylobacter infection is diagnosed when a culture of a stool specimen yields the organism.

Treatment of Campylobacter infection
Almost all persons infected with Campylobacter recover without any specific treatment. Patients should drink extra fluids as long as the diarrhea lasts. In more severe cases, antibiotics such as azithromycin or erythromycin can shorten the duration of symptoms if given early in the illness. Your doctor will decide whether antibiotics are necessary.

How common is Campylobacter?
Campylobacter is one of the most common causes of diarrheal illness in the United States. The vast majority of cases occur as isolated, sporadic events, not as part of recognized outbreaks. Active surveillance through FoodNet indicates that about 13 cases are diagnosed each year for each 100,000 persons in the population. Many more cases go undiagnosed or unreported, and campylobacteriosis is estimated to affect over 2.4 million persons every year, or 0.8% of the population.

Long Term Consequences
Most people who get campylobacteriosis recover completely within two to five days, although sometimes recovery can take up to 10 days.

Campylobacteriosis is not a nationally notifiable disease, although many state health departments do track cases. Physicians who diagnose campylobacteriosis and clinical laboratories that identify this organism should report their findings to the local health department. If many cases occur at the same time, it may mean that many people were exposed to a common contaminated food item or water source which might still be available to infect more people. When outbreaks occur, community education efforts can be directed toward proper food handling techniques, and toward avoiding consumption of raw (not pasteurized) milk.