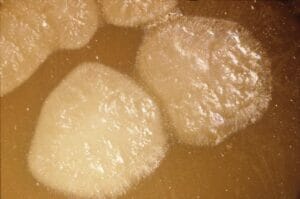 Botulism is a rare but serious paralytic illness caused by a nerve toxin that is produced by the bacterium Clostridium botulinum and sometimes by strains of Clostridium butyricum and Clostridium baratii. Foodborne botulism is caused by eating foods that contain the botulinum toxin. All forms of botulism can be fatal and are considered medical emergencies. Learn more!

About Clostridium botulinum
Clostridium botulinum is the name of a group of bacteria. They can be found in soil. These rod-shaped organisms grow best in low oxygen conditions. The bacteria form spores which allow them to survive in a dormant state until exposed to conditions that can support their growth. There are seven types of botulism toxin designated by the letters A through G; only types A, B, E and F cause illness in humans.

Is foodborne botulism common?
In the United States, an average of 145 cases is reported each year. Of these, approximately 15% are foodborne. Outbreaks of foodborne botulism involving two or more persons occur most years and are usually caused by home-canned foods. Foodborne botulism is a public health emergency because many people can be poisoned by eating contaminated food.

Symptoms of botulism
The classic symptoms of botulism include double vision, blurred vision, drooping eyelids, slurred speech, difficulty swallowing, dry mouth, and muscle weakness. Infants with botulism appear lethargic, feed poorly, are constipated, and have a weak cry and poor muscle tone. These are all symptoms of the muscle paralysis caused by the bacterial toxin. In foodborne botulism, symptoms generally begin 18 to 36 hours after eating a contaminated food, but they can occur as early as 6 hours or as late as 10 days.

How is botulism diagnosed?
Physicians may consider the diagnosis if the patient’s history and physical examination suggest botulism. However, these clues are usually not enough to allow a diagnosis of botulism. Other diseases such as Guillain-Barré syndrome, stroke, and myasthenia gravis can appear similar to botulism, and special tests may be needed to exclude these other conditions. These tests may include a brain scan, spinal fluid examination, nerve conduction test (electromyography, or EMG), and a tensilon test for myasthenia gravis. Tests for botulinum toxin and for bacteria that cause botulism can be performed at some state health department laboratories and at CDC.

Treatment of botulism
The respiratory failure and paralysis that occur with severe botulism may require a patient to be on a breathing machine (ventilator) for weeks or months, plus intensive medical and nursing care. The paralysis slowly improves. Botulism can be treated with an antitoxin which blocks the action of toxin circulating in the blood. If given before paralysis is complete, antitoxin can prevent worsening and shorten recovery time. Physicians may try to remove contaminated food still in the gut by inducing vomiting or by using enemas. Good supportive care in a hospital is the mainstay of therapy for all forms of botulism. Physicians should immediately report suspected cases of botulism to their state health department.

Complications associated with botulism
Botulism can result in death due to respiratory failure. However, in the past 50 years the proportion of patients with botulism who die has fallen from about 50% to 3-5%. A patient with severe botulism may require a breathing machine as well as intensive medical and nursing care for several months, and some patients die from infections or other problems related to remaining paralyzed for weeks or months. Patients who survive an episode of botulism poisoning may have fatigue and shortness of breath for years and long-term therapy may be needed to aid recovery.

Preventing botulism
Many cases of botulism are preventable. Foodborne botulism has often been from home-canned foods with low acid content, such as asparagus, green beans, beets and corn and is caused by failure to follow proper canning methods. However, seemingly unlikely or unusual sources are found every decade, with the common problem of improper handling during manufacture, at retail, or by consumers; some examples are chopped garlic in oil, canned cheese sauce, chile peppers, tomatoes, carrot juice, and baked potatoes wrapped in foil. Persons who do home canning should follow strict hygienic procedures to reduce contamination of foods, and carefully follow instructions on safe home canning including the use of pressure canners/cookers as recommended through county extension services or from the US Department of Agriculture. Oils infused with garlic or herbs should be refrigerated. Potatoes which have been baked while wrapped in aluminum foil should be kept hot until served or refrigerated. Because the botulinum toxin is destroyed by high temperatures, persons who eat home-canned foods should consider boiling the food for 10 minutes before eating it to ensure safety. Honey can contain the bacteria that causes infant botulism so, children less than 12 months old should not be fed honey. Honey is safe for persons 1 year of age and older.