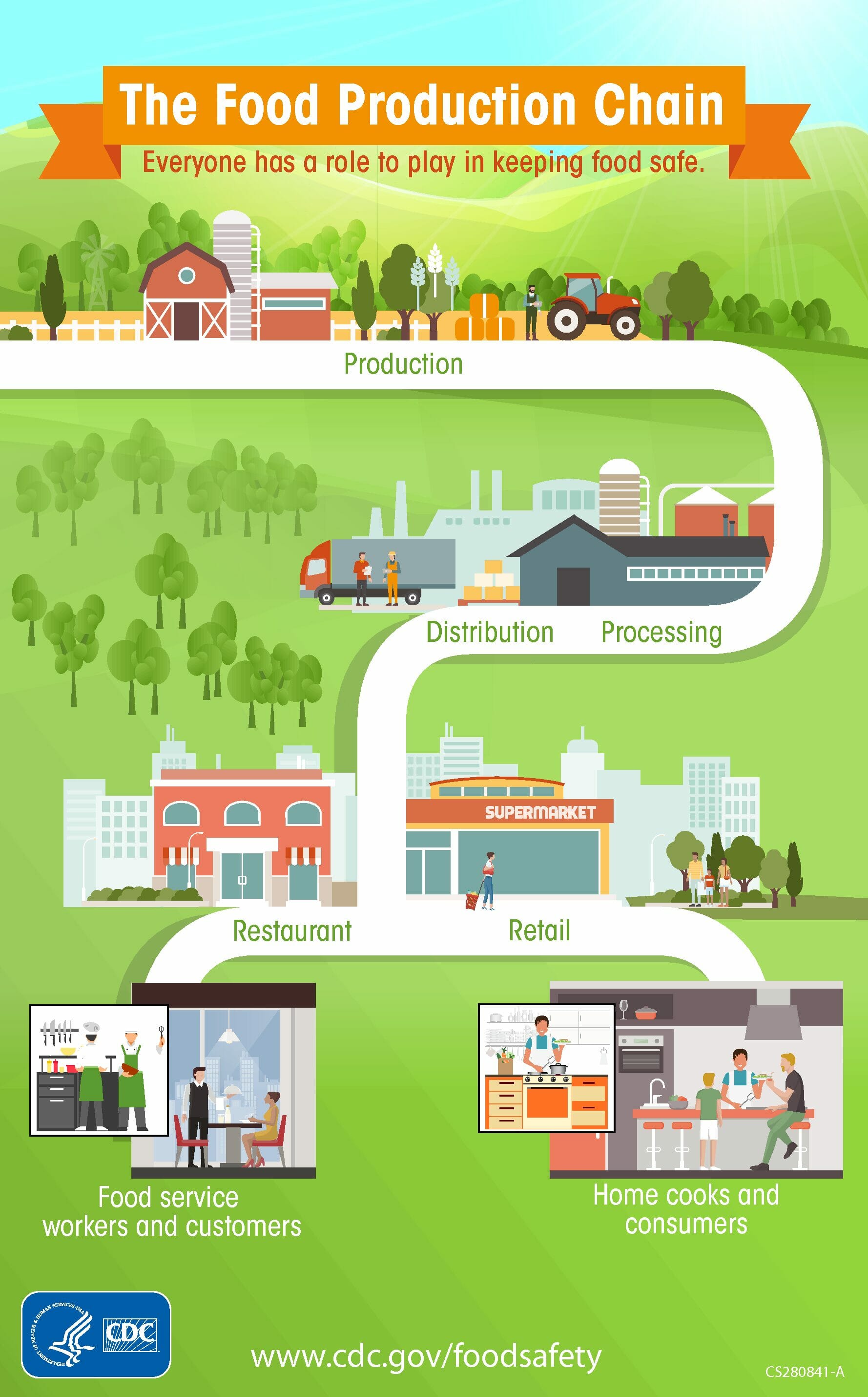 From Farm to Table: How Food Gets Contaminated and Your Role in Preventing It

In the U.S., our food supply chain is extremely complex.

For any one particular food you consume—apples, orange juice, broccoli, hamburgers, frozen pizza, or hundreds of others—many processes and people have played a role in bringing you that food. All of those steps make up a system called the Food Production Chain.

Contamination of food can happen during any point along the chain, which includes:

Let’s take a look at the steps in the Food Production Chain and pinpoint specific ways that food can become contaminated while being handled in each step:

The production of food involves growing the plants (fruits/vegetables) and raising the animals (cows/pigs/chickens/other livestock) we eat as food. While most of our food comes from domesticated plants and animals produced on farms, some are harvested or caught in the wild such as certain kinds of fish.

How Contamination Can Happen in Production

The processing of food involves turning the plants and animals we grow into marketable goods for our consumption. The types of processes used vary based on different foods. For produce, processing may be as simple as washing and sorting; however, it may be more involved to include trimming, slicing, or shredding. For animals, processing involves slaughter as a first step. After slaughter, many different steps may take place including cutting the meat into pieces, smoking/cooking the meat, or combining the meat with other ingredients to make frozen meals. For milk, it’s typically processed by pasteurization or it may be made into cheese.

How Contamination Can Happen in Processing

The distribution of food involves getting food from its place of processing to you, the consumer, at a service location such as a grocery store, restaurant, or cafeteria. Distribution can be simple or complex. Sometimes it only involves transporting fruits and vegetables to a local farmers’ market. Other times it involves many steps. For example, when frozen hot dogs need to be delivered to a restaurant, they might first be trucked from a meat processing plant to a large supplier where they’re stored for a short time in a warehouse. From there, the hot dogs are transported to a restaurant chain’s local distribution facility and then, finally, they’re trucked over to a restaurant.

How Contamination Can Happen in Distribution

Preparation of food involves steps that get food ready to eat. It takes place in the kitchen of a home, restaurant, or service facility like a hospital. Preparation can require many steps when whipping up a complex recipe or it can be very simple such as when a frozen meal is heated in the stove/microwave.

This is where your role as a consumer becomes very important. When you’re at home in your kitchen, there’s a lot you can do to prevent contamination of food and all of the horrific health consequences of a foodborne illness.

How Contamination Can Happen in Preparation

As you’ve seen, many scenarios can cause contamination of food. And many steps in the Food Production Chain are simply out of your control. But, for those that are, we urge you to be diligent about taking the right actions to prevent harmful pathogens from lurking in the food you eat.